Wissensimpuls
Who is responsible for my access to research journals and books?

Wissen managen
Are there services to support my research?

Wissen bündeln
Do we have ebooks?

Geballtes Wissen
How can I discuss and share my data and ideas?

Wissensvielfalt
Is there a home for my research data?

The conference is over – and we would like to take a brief look back at the first Open Science Days.

The event, being organized by the MPDL, was held at Max Planck Society's Harnack House in Berlin on 13/14 October. We were delighted to welcome about 45 international participants. In attendance were researchers and specialists from various institutions from in and outside of Germany.

We have tried to recruit speakers representing the whole variety of Open Science. This really worked well and we were able to present a packed program covering a big range of topics.

Another objective of the Open Science Days was bringing together experts from all kinds of disciplines and institutions in order to give room for personal dialog. This opportunity was very well adopted by all participants so we have seen a lot of discussion and exchange apart from the official program in the pleasant atmosphere of the Harnack House. 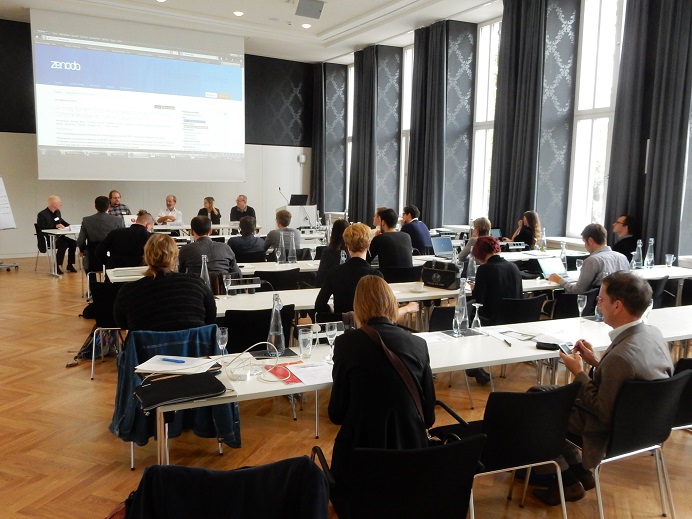 For all who missed the Open Science Days or those who want to review the given presentations, the material is available here.

We brought a lot of valuable impressions back to Munich and we would like to give a short summary of some of the presentations:

On Monday noon the conference was opened with an inspiring keynote by François Bry of the Ludwig Maximilian University Munich. His talk was a reflection on the "gifts of openness" and on the improvements which all forms of openness can imply for science itself as well as for higher education. Prof. Bry stated that the concept of openness perfectly fits to the "gift economy" already established in the minds of today's students. On the other hand, one of the greatest chances of openness for universities lies in the tracking and analysis of user requests (footprints). In this context, Prof. Bry argued in favor of the establishment of a "libertarian paternalism" in higher education.

Michael Hanke who heads the Psychoinformatics lab at the Otto von Guericke University Magdeburg, told us about Open Data in Neuroscience. Talking about motivation and benefits of openness for researchers, such as transparency, accessibility, reproducibility and responsibility, he pointed out that it's important to make researchers aware of the concrete benefits resulting from open data ("what's in for me?").

After that, Mr Hanke gave a report on his project which included the collection of a high-resolution functional magnetic resonance (fMRI) dataset from test persons listening to the 2 h audio movie "Forrest Gump". Research data has been made publicly available and, though there isn't any concrete result yet, this approach seems to be very promising.

Isabella Peters (ZBW Kiel) provided an overview on the current status regarding altmetrics. Focusing on social media Prof. Peters stated that altmetrics tend to be more an extension to existing evaluation systems – not necessarily a replacement for them. It became clear that a huge amount of data is available in connection with social media and this data already is relevant in several ways.

In this context Prof. Peters pointed out that it will be important to understand and to thoroughly analyze this data set deriving from social media usage – for today, it still is unclear what many of the findings could exactly mean to research evaluation and future "impact" measurement.

On Tuesday the first session started with a comprehensive talk by Geoffrey Boulton of the University of Edinburgh / The Royal Society on the impact of openness on science.

Prof. Boulton illustrated how the traditional way of how research is conducted has been changed by a "data storm" resulting from today's research practice. Those masses of data imply both challenges and opportunities to the future of science. A fundamental challenge is the provision of replicability and therefore credibility of scientific results by having all data relevant to a publication published in an electronic database. On the other hand, open communication of data offers benefits such as faster response to emergencies, deterrence of fraud or malpractice and a faster and more effective response to many of today's challenges like climate change or energy issues.

A compulsory precondition for obtaining benefits from openness is that it comes as "intelligent openness" which means that data are discoverable, accessible, intelligible, assessable and re-usable.

An exciting report on concepts of and experiences with Citizen Science was provided by Jaume Piera from the European Citizen Science Association. Mr Piera, among other things, was talking about the CITCLOPS project which is dedicated to a community-based environmental (ocean and coastal) monitoring using own devices, such as smart phones as sensors. Interested lay persons are provided with simple devices for data acquisition, such as "Secchi discs" for measuring water transparency or scales helping with the determination of color shades. This equipment can even be supplemented by sensor buoys using low cost hardware.

This approach puts marine scientists in a position to collect and analyze large amounts of data which they would never have been able to acquire on their own.

These are just a few examples of all exciting talks given at Harnack House. We enjoyed the substantial input by our speakers as well as the lively contribution by the participants. Having these impressions in mind we really look forward to the next Open Science Days.

For Researchers For Information Experts

Out of Office - Never out of Service!